The mantle is a muscle that holds the body to the shell and is responsible for keeping the shape of the snail inside the shell. Normally the mantle is expanded to meet the outer lip of the shell and you will see it encroaching and sometimes covering the columella.

The mantle can either tear away from where it is connected to the shell or collapse entirely. 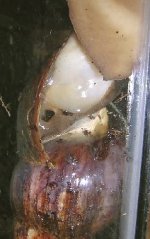 Figures 1,2 and 3 show what a Mantle tear looks like. Tears can heal quite quickly because the snails can seem largely unaffected. They still move around and eat so it isn't long before they heal.

The mantle collapses and looks like a sock covering the body. You can see over the rim and right down the shell. The snail when extended looks a sorry sight and struggles to pull its shell around. It also struggles to retract having no real cavity to invaginate into. The collapse must put quite a bit of pressure on the lung as the breathing cavity is restricted. Mantle collapse seems to be healable but it takes much longer because it is difficult to get the snail to eat.

At the moment there isn't any solid information on the causes of mantle problems. It seems to be caused by one of the following things:

For Aquatic snails, for which there is more information, this problem is fatal, probably due to infection or pressure on the lung. But this isn't the case for land snails.

The first thing to do is to move the affected snail to a shallow container. This will limit climbing and stop more strain on the mantle. It would seem that this is the only course of action needed for tears. Care should be taken to keep the tank a little cleaner than normal to ensure no infection can occur. For mantle collapse more drastic measures are needed.

Firstly the snail will need a much more humid environment than normal because they struggle to retract and will dry out. Regular spraying is needed to stop this. You'll also need to wake the snail up by spraying and place it right in front of the food. In my case, the snail refused to eat at all and just kept burrowing. I think this is the normal reaction to being hurt. After a few weeks of no improvement it was looking sadder than ever but I persevered and it started to feed. Only small amounts were eaten but the mantle began to look more substantial again and currently it appears to be healing. However, the snail is still very inactive compared to a healthy snail, probably due to malnutrition and weakness. I am continuing to build it up and at the moment my hopes for its survival are quite high.

I did have a crisis of conscience about euthansing it many times. In the wild, it would have been eaten or dried out within a few days so I felt I was prolonging the agony, particularly because there were no signs of improvement. Had I know for certain it would survive I would have been fine. I came close on 5 occasions because it looked so pathetic and it was upsetting to witness. But, I am glad to report that it seems to have paid off so I suggest perseverance.

To search the forum for threads definitely relevant to this problem click here.

To search the forum for threads that may be relevant click here.