If a snail is rasping its own shell it could be:

Sometimes, snails provided with calcium will refuse to eat it or suddenly stop. If you think this may be the case or it is happening excessively and visibly scarring the shell click here.

Many people observe their snails rasping minor amounts from their shell, particularly near the aperture. If it is infrequent and not excessive it doesn't seem to cause any harm and it may be the snails removing rough patches or more likely, evening off a chipped shell-lip ready for new, even growth.

The snail featured in Fig 1. seemed to be afflicted by mites or pests and was rasping its shell near the suture. Quarantine in this case solved the problem and the shell was soon repaired by the snail. For more details of this particular case click here. 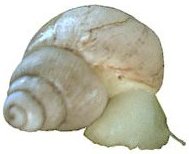 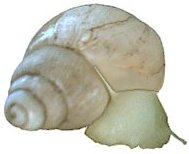 Fig. 2 shows Fig. 1 altered to illustrate how the problem may manifest itself initially. I have seen this with a snail that wasn't suffering from mites and had a plentiful supply of cuttlefish, but showed a few of the symptoms of the Deep Retraction Disorder. However, this disorder has yet to develop fully in this case. The shell around this damage was very thin and broke off to look like Fig. 1. It seems this symptom could be caused by a few afflictions:

If a snail is rasping the shell of other snails it could be:

Small snails kept in a tank with larger ones will result in some cases of larger snails being rasped by the smaller ones. This is inevitable and seems to suggest that small snails don't realise that the large snails are in fact snails, and consider them moving calcium! Supplying a calcium-rich diet and lots of cuttlefish, evenly distributed in smaller pieces around the tank seems to curb this problem considerably.

There is also another case I have witnessed of one species rasping the shell of another species of similar size. The shells of the two species (in this case panthera being rasped by reticulata) are quite different and I wonder if the reticulata didn't recognise this as a snail shell. I have also read comments that suggest keeping Archachatina with Achatina is a bad thing, but they don't say why. As members of these two genera seem to have different kinds of shells, I wonder if this could be the reason?

If you think this may be the case or it is happening excessively, visibly scarring the shell and you think it is not accidental then click here.