Mites are quite a common problem for snails in captivity. Some types are often overlooked under casual inspection because they are not easy to see, being about the size of a full stop. Mites are so small that they can easily be brought into our tanks via food, decoration or any wild additions to the tank. More often than not they spread when snail owners distribute snails to each other. That is what happened to me the first time I encountered them. A snail I received had mites and they spread right through the tank. I killed the mites, washed the snails and then a week later they were back. There are a few different types you may encounter. 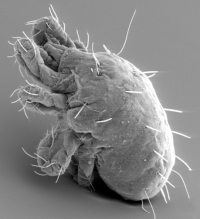 The most common type of mite you will encounter is likely to be Riccardoella limacum or at least a very close relation, possibly Riccardoella oudemansi.6 They can easily be found on wild slugs and snails. They are tiny, white, move very quickly and are true blood feeders:

"It is a cosmopolitan species well known in Europe and North America which lives on the body surface and within the mantle cavity of a variety of terrestrial molluscs. When present, small white mites can be seen moving rapidly over their host...1

...Histological and histochemical techniques revealed the absence of slug mucus and the presence of slug amoebocytes in the gut caeca of the mite. The evidence available supports the contention that the slug mite is a blood feeder and obtains this food by producing a feeding tube or 'stylostome' in the tissues of its host." 3

Apparently "They are often present in considerable numbers with no apparent harm to the host mollusc." 1 though this is unlikely to be true as the following shows:

Fig. 1 - A heavy infestation of the slug-mite, Riccardoella limacum (Schrank), around the pulmonary aperture of a tawny garden slug, Limax flavus. 1

"According to information from breeder circles a vineyard snail up to 60 mites without problems can bear. After our own observations however already 6 mites are sufficient, in order to make from a before life-glad and lively snail a appetiteless and apathetic misery, which goes into few weeks to reason. There are scientific investigations, which prove that Ricardoella limacum mites in-bore themselves in addition, deeply into the fabric of the snails, without it again to then ever leave.

In the UK they are known to infest many species of slug and snail:

"The snails Helix pomatia L. and H. aspersa Mull. are also commonly exploited. There are numerous references in the literature to mites on these and other molluscs. In a Northumberland (England) garden, White (1959) found approximately 30% of Arion ater, 12% of Arion hortensis Fér., and 40% of Milax budapestensis (Hazay) infested with the mite." 1

They hide under the shell rim and congregate in the pneumostome.

Baker (197Oa. b; 1973) has studied its life-history, feeding habits, and internal anatomy in Britain and shown that the mite is a true parasite which feeds on the blood of its host. Previously it had been contended that the slug mite was a commensal or mucous feeder. 1

"The slug mite was first noticed by Reaumur in 1710 and over the years three species were named. Turk & Phillips (1946) synonymised these under the name Riccardoella limacum (Schrank, 1776). These authors listed 31 species of molluscs on which R. limacum was found, and mentioned that in Britain its preferred hosts were the slugs Arion ater (L.), Milax gagates (Drap.). Milax sowerbyi (Fér.), Agriolimax agrestis [= Deroceras reticulatum (Mull.)], and especially Limax maximus L. 1

Washing can help a lot, perhaps even get rid of them in rare cases but nearly everyone I spoke to said they came back with time. This is no wonder with the fact they hide in the pneumostome. They can also swim across water on the tension.

Luckily there is a way to rid your snails of these mites. I bought some Hypoaspis miles predatory mites and these were fantastically successful. They picked the snails clean, inside the pneumostome also (I saw them running in) and since then, they have never returned. Other people have reported similar success. I think this needs to be done as soon as possible if that information about them boring in the flesh is true. However, with frequent treatments, the population would only survive for that generation so I doubt that is anything to worry about.

They are not cheap because they are only available in large quantities, intended to treat large surface areas of land, but they are cheap enough to use, periodically when needed. Also, the large quantity is certainly useful for eradication because with so many predators on the loose, the harmful mites don't stand much chance of escaping detection.

For more information on this mite and how to use them click here. 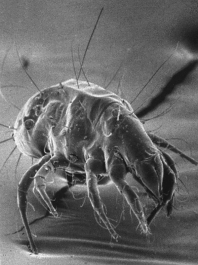 There have also been cases of a different mite that was originally described as a tick or louse. It seemed to infest the faeces as if it lived inside the bowels. These descriptions and observations lead to some research that turned the following up as a likely candidate:

"Various species of mites often infest stored foodstuffs and various drugs, and cause losses in food and drug products, especially in humid and warm area[1-9]. They are small creatures of about half a millimeter in body size and creamy white in color, proving difficult to be detected from drugs and food products. Therefore, the incidence of various forms of human acariasis presumably caused by the ingestion of mite-infested food is unusually high in China"

"Acaroid mite can survive in many environments including the storehouse, human and animal bodies. Its infestion in human can cause acariasis in several organs including the lung, intestine and urinary tract[17-26].

In this study, mites were identified in 124 of the 1994 stool samples. The mite species observed in stool samples included Acaridae, Glycyphagidae, Carpoglyphidae, Pyroglyphidae and Tarsonemus, being in accordance with those found in the working places of the patients. This confirmed that mites being able to live in intestinal tract and causing intestinal acariasis were transmitted through living environment and stored foods. The respiratory infection through the polluted air may also be an alternative pathway." 4 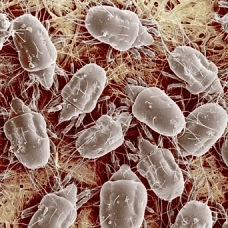 There have been a number of possible cases of these, of course at this stage it is only speculation that they are in fact Acaroid mites. In response to this information, Emma Deady said:

"I am 99% sure that this is the same pest that I have in my tanks. they are nasty little buggers and they multiply really quickly. I am pretty much certain that they come out of the snails and then ingested to continue the cycle. Im suggesting that they complete the larval stage inside the digestive system of the snail, which is probably why they are detrimental to their health. I think they are pretty much impossible to be ridded of unless something is found we can safely give our snails to kill them. I dont think changing the peat will work as I imagine that they have very short life-cycles. The only thing that changing the peat seems to do is slightly reduce the population. They do seem to have quite a nasty effect on smaller snails and stunt their growth considerably I have also found they dont affect Archachatina marginata much (the snails that I received the mites with) but they seem to have a marked effect on the growth and general health of Achatina fulica. I am wondering if marginata have a greater resistance to these pests, as my margies have continued to grow steadily and seem quite healthy." 5

In the case above, the wild-caught Archachatina marginata that introduced them to the colony seemed largely unaffacted whilst other species such as Achatina fulica were affected and seemed stunted. If it possible they have a worm-like affect on health by consuming food intended for the snail. However, there is no way of knowing if the mites were directly responsible for this.

Unfortunately at this time there is no known treatment for these mites. It appears that regular cleaning helps to limit them only.

Hypoaspis miles. Everything you need to know.