Achatina fulica is the most commonly available and widespread type of African land snail. If it's in a pet store or the supplier doesn't know the species then it is almost certainly this type.

They have been introduced to many countries both deliberately and accidentally and have become serious pests. To search google for information on this click here. 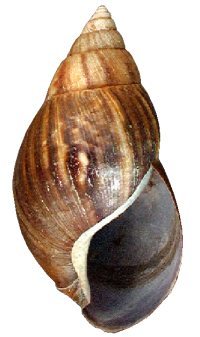 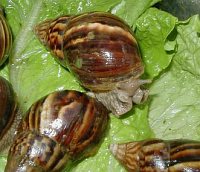 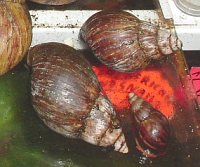 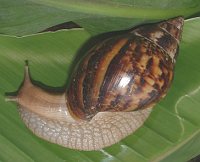 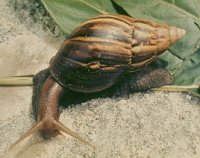 Average adult shell length is 12cm, with a diameter of 6cm. In exceptional cases the shell can grow to be 20cm long but this is very unlikely, especially in captivity. Most of the growth is achieved in the first 6 months but they do continue to grow for another year or so. It is generally accepted that you can judge the final size of your snail after 1 year.

The shell is conical in shape and fairly pointed.

There is a wide variety of shell and body polymorphism in snails, perhaps none more than Achatina fulica. This often leads to it being mistaken for less widespread species.

"Achatina fulica is a protandrous hermaphrodite. Adults have male and female sexual organs, with the male organs maturing earlier. Male sexual maturity occurs within less than a year, sometimes as young as five months. After copulation they are able to store sperm, making successive egg-laying possible after just a single mating. Several hundred eggs per clutch may be laid. Their egg color is yellowish-white to yellow, with a somewhat oval shape and measures 4 to 5.5 mm (approximately ¼ inch) in length and approximately 4 mm in width.

Shell size may be up to 20 cm (8 inches) in length and 12 cm (almost 5 inches) in maximum diameter. Generally there are seven to nine whorls and rarely as many as ten whorls. Achatina fulica prefers environments that are rich in calcium carbonate, such as limestone, marl, and built up areas where there is an abundance of cement or concrete. In these calcium-rich areas the shells of the adults tend to be thicker and opaque. Juveniles generally have a thinner, more translucent shell and are more brittle. Note that even in this post-embryonic juvenile the characteristic truncated columella is already evident. Upon emerging from its egg shell the length of the post-embryonic juvenile shell measures approximately 4 mm (approximately 1/6 inch).

Though shell coloration may be variable due to environmental conditions and diet, generally it is reddish-brown with light yellowish, vertical (axial) streaks. The two shell colors are not distinct from each other and are somewhat streaked or smudged in appearance. Another shell color variation resembles a light coffee color. The colors fade with age in the earliest whorls appearing lighter or less intense, becoming darker and more vibrant nearest the body whorl.

The body of the live animal has two pairs of tentacles, one short lower pair that are tactile and chemotactic, and one longer upper pair with eye spots at the tips. The body itself is moist, slimy and rubbery. Body coloration can be either mottled brown or more rarely a pale cream color. The footsole is flat, with coarse tubercles most evident laterally on the upper surface of the extended body.

The outline of the shell may vary somewhat, even within the same colony, from slender to moderately obese. The broader specimens with the same number of whorls tend to be shorter in shell length. The shell is generally conically spired and distinctly narrowed but barely drawn out at the apex. The whorls are rounded with moderately impressed sutures between the whorls. The aperture is relatively short and has an ovate-lunate shape. The lip is sharp, convex, thin and evenly curved into a regular semi-ellipse. The shell surface is relatively smooth, with faint axial growth lines.

One of the most important identification features of Achatina fulica is the columella which truncates or ends abruptly, a feature remaining evident throughout the lifespan of the snail. The columella is generally concave; lesser concaved columella tend to be somewhat twisted. The broader shells tend to have a more concave columella. The columella and the parietal callus are white or bluish-white with no trace of pink."

Dependent on the temperature, the babies will hatch in anything from 5 to 21 days.

In normal, stable conditions the hacthing viability is about 90%.

Achatina fulica are one of the easiest species to hatch requiring no special attention.

Achatina fulica are slightly more sensitive to wet environments than other African snails and will die if maintained in conditions that are too wet.