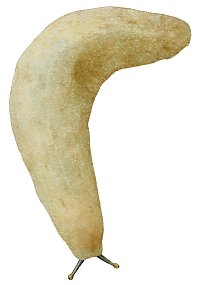 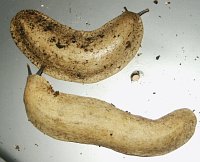 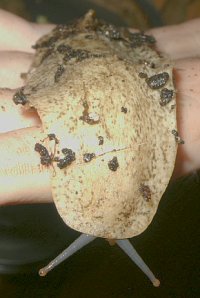 Pancake Slugs are a very unusual, flattened slug species that have recently become available from wild caught populations in Barbados. They are fairly easy to care for, and will eat a wide variety of vegetables and fruit.

They are variable in colour, ranging through white, cream and grey and are usually covered with markings of different shades of grey.

In the wild these slugs like to hide under logs, boards and other objects on the ground and are more likely to be found during rainfall. They have become a pest species in Florida in the United States, eating crops.

They move fairly quickly and seem to be primarily nocturnal, preferring to shy away from light.

Average adult size is around 12cm long and around 2cm wide when fully extended, though they may get larger. Unfortunately there is very little information regarding these slugs, especially in captivity.

Current captive populations are likely to originate from specimens wild caught in Barbados. They are also found in Bermuda, Dominica, Dominican Republic, St Lucia and St Vincent but probably originated in Jamaica. This species is considered a serious crop pest in Florida, United States.

The lifespan of these slugs is unknown, some species of European slugs (Limax maximus for example) live for around 3 years in the wild and possibly longer in captivity. This is probably dependent on seasonal dormancy, something which we know very little about for this species. Often captive caught snails don't outlive their wild counterparts usually due to the lack of dormancy in captivity.

These slugs can be identified fairly easily, especially when compared to European slugs. They have flattened bodies and eyes that protude from beneath a "helmet". Their colour is highly variable but familiar, ranging through different shades of white, grey and cream. Most have markings and patterns of varying shades of grey.

Pancake slugs, appreciate hiding places, which can be a log, a piece of bark, moss or a decorative object from a pet store.

These slugs can be fed on many vegetables and fruits that are also often taken by various slugs and snails. It is certainly worth offering a wide range. The slugs appear to need some calcium and will utilise supplies addtional to their normal food supply. 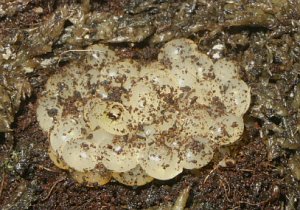 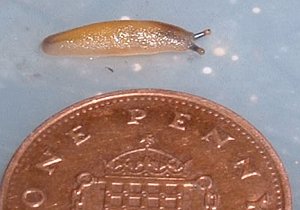