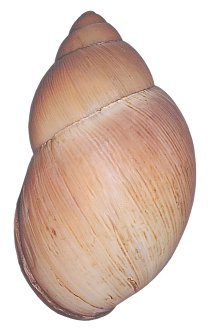 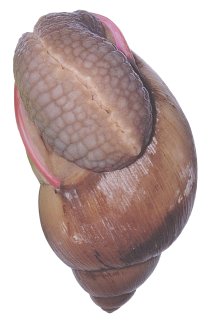 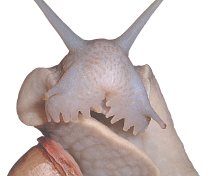 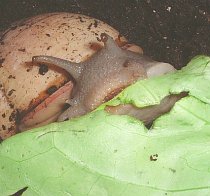 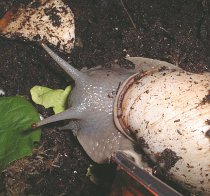 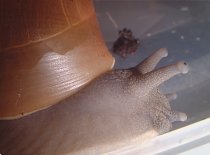 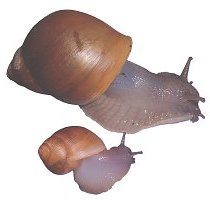 I have identified this species as Megalobulimus oblongus. Mine were wild caught in Barbados and listed as Bulimulus spp. A number of sites have my exact snails pictured and listed as Bulimulus. However, after speaking to an exporter I was told that there has yet to be a study of land snails in Barbados or at least the local authorities have never heard of any. When I look at other Bulimulus snails, mine seem to be more similar to Megalobulimus and in fact look identical as far as I can tell to Megalobulimus oblongus. Coupled with the fact that this species has spread to the Caribbean and is considered a pest, this now seems most plausible.

These snails are about 7-8 cm (shell) long. The species itself can grow to 7-11 cm (shell). They are rather elegantly curved with a slightly bulbous shell which is ridged. The shell is cream leading to some chestnut/pink patches. The second largest whorl has a characteristic bulge. The columella is not truncated and in my specimens it is light pink. The pink shell lip is different to other snails I have seen; being curved back on itself in a very rigid fashion not unlike a trench or canal. This seems an unusual feature as this trench soon gets filled with dirt and soil.

The body is different from Achatininae snails quite considerably, they have rather gelatinous bodies that are somewhat flatter. They produce less mucus and seem to have far less suction, the strongest coming from further down the foot. The snails themselves seem quite heavy although their external body does not. The body is a blueish-grey with browner tubercules/lumps/patches. The foot is cream.

They have huge mouths with a flap either side that contains a row of fronds. Each frond seems capable of independent movement. They definitely use them as a way of feeling around, in what seems like a more useful way than other snails. They really do wave and wiggle them over pieces of food. It looks like us wiggling our fingers gently and slowly.

Their eye-stalks/tentacles are proportionally smaller than other snails, compared to their chubby heads. They have a somewhat different appearance to the more slender and streamlined form of more usual species. They have the genital opening visible but smaller and less swollen.

Native to a large part of the neotropical world including Argentina, Brazil, Columbia and Uruguay. They have spread however to various parts of the Caribbean including Jamaica, Martinique, Barbados and the Lesser Antilles.

They are nocturnal but in a strange way. I first thought that they buried themselves at the first sign of prolonged light. But actually, it seems they work to a routine or body clock. Normally I cover my snails if I'm using the room at night to ensure some normality for them. This coupled with lamps means I can keep a fairly reasonable light dark routine. For my African snails this is 13/11 - 11/13 but I now need to look into light cycles in Barbados. Even with no covers and the light on, they will come out, and they burrow hours after. It doesn't seem to confuse them. But the time actually varies each night. I've not recorded it, something perhaps I should out of curiosity. Even though they are nocturnal, once active they are not at all shy.

Standard care conditions seem appropriate. As with all tropical snails they may need additional heat at certain times of the year. See the main care guide. I have found that below 20°C and over 26°C, they tend to become less active so somewhere between these two is ideal.

Unfortunately so far they have proven to be very fussy eaters, refusing most food I have tried, which is extensive. They will eat copious amounts of lettuce, and tiny amounts of apple, banana, papaya and porridge and occasionally cucumber skin. I am still persevering. I can only assume lettuce is the closest thing to what they normally eat. Unfortunately this makes for a rather limited diet. I have also tried slightly fermented food, thinking this would be more natural but again no interest.

Update: They readily accepted Dandelions and Common Plantain so it seems they are primarily leaf-eaters.

Breakthrough: I have discovered that slicing their food extremely finely is successful. They don't seem to be able to rasp larger items and seem to prefer getting their mouths around the food rather than on top. By slicing the food they take a much healthier variety readily. Also, perseverence has paid off because they are more interested in other foods than they were. It must be noted that the babies I have had were no problem at all, and do actually attempt to eat larger pieces though thin slicing is still more successful. The babies also readily accept cuttlefish bone which the WC ones refuse. Luckily they will eat it powdered and, like most snails, I have discovered they love powdered oyster shell.

Very little information available. For Megalobulimus generally, the snails mature sexually after 3 years, this will be shorter in captivity. They can lay about a dozen large white eggs which hatch in 4-5 weeks.

They lay eggs reguarly, two at a time. They are absolutely huge, 27-30mm each in size, which is enormous for a 80mm snail. Other literature mentions them laying 6-12 eggs but I can't imagine them being able to hold more than two so I am wonder if the dozen eggs are spread out over a season. Before laying the snail looked extremely fat and was bulging from its shell.

Unfortunately I have not had enough success to figure out a winning formula. Only two have hatched so far out of numerous eggs. On opening the eggs well after the normal hatching time, I have not found any half-developed foetuses, just liquid. Out of the two that hatched, one was moved to and hatched in a warm cupboard and the other was left undisturbed in the tank, both different ends of the spectrum so I still don't know if I haven't found the correct method or the eggs are infertile. I have no idea how old the WC parents are so this could be a factor. 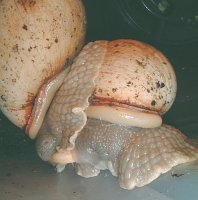 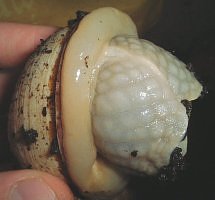 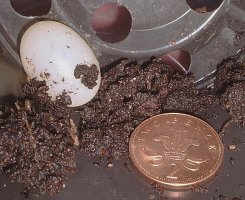 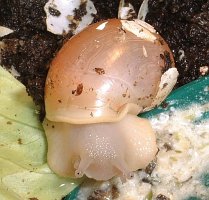