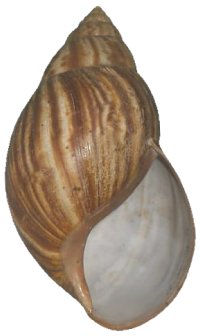 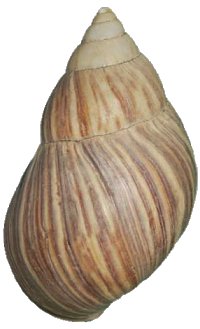 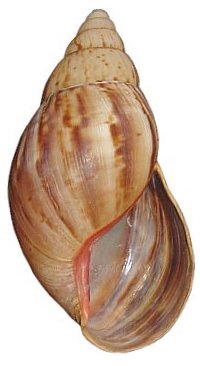 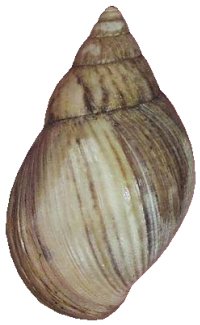 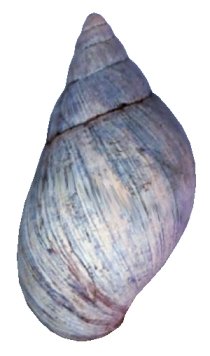 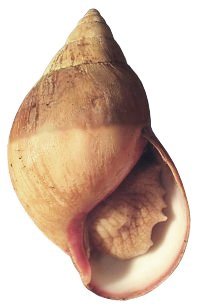 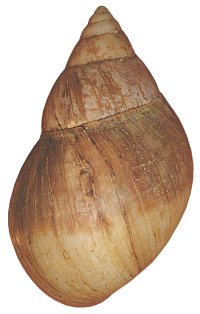 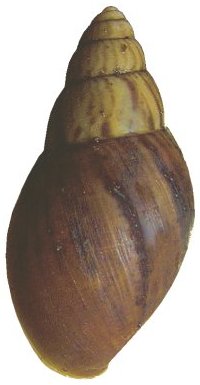 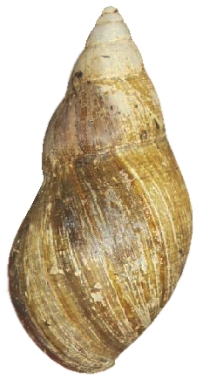 This extremely variable species is likely to be East African in origin but has also spread down to parts of South Africa and is often confused with Achatina fulica (Bowdich, 1822). Slender specimens were once considered a distinct species, Achatina panthera (Férussac, 1832). Analysis of the reproductive systems of both species proved them to be identical. This obviously means that the two species need to be normalised. To my knowledge this hasn't been done yet although I did read that Prof. Albert Mead was conducting a full anatomical study of the Achatindae, I've just not found any published conclusions and I did contact him. He's a busy man I suppose. So, I've tried to make sense of what types we know are out there. I refrain from using the word variants as this guide is hardly useful for taxonomists and without any sort of wild locality information these definitions are largely whimsical.

Achatina immaculata is a very special and culturally important shell in Africa and has been used since the Iron Age for a number of different purposes. African women used the shells to dig clay for their clay pots and beads and cups were made from the shell. The Mapungubwe people, who lived about 1100 a.d. used the shells as offerings to their gods. 1

It is perhaps the only Achatinid from South Africa that could develop into a pest due to its breeding potential, environmental tolerance proven by its fairly wide distribution and its predilection for some crops such as citrus orchards. 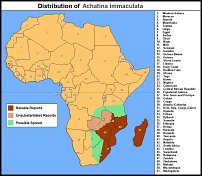 Click the map to the right to see a larger version of it.

Note: The countries from which specimens have been confirmed or reported are highlighted but that does not necessarily mean they are evenly distributed within that country. They are very much restricted and governed by the local geography. In South Africa for example, immaculata are much more prevalent around the coastal areas.

It is also quite possible that humans have spread this snail to other parts of Africa not detailed.

Immaculata are tremendously polymorphic it seems, so it stands to reason that when depauperation occurs the results would probably be more extreme than in less variable species. For a species to continue, sexual organs must stay the same, or incredibly similar, a small mutation would cause the end of that genetic line through incompatibility. That's not the case with shells and is probably largely irrelevant when they choose partners. This would help to explain the wide variation in outward appearance. 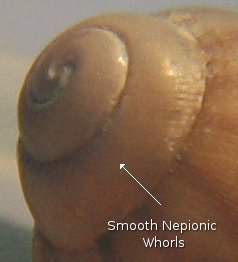 The descriptions of the various subspecies are covered in more detail below. However, there are a few main characteristics shared by all which help us to determine them.

They have a pointed shell like all Achatina, the early whorls often turning white with age, and the pink (excluding the albino variant) columella is deeply truncated, long and weakly concave to nearly straight, but can be twisted.

Like all Lissachatina, the nepionic whorls are smooth (10x). This characteristic helps to determine between Achatina smithii (Craven, 1881) and Achatina balteata (Reeve, 1849) which has a pink-brown columella.

It also assists in ruling out a species found in a similar locality, Metachatina krausii (Pfeiffer, 1846). Adults of this species are quite distinct with an almost truncated columella but juveniles could be mistaken because they have non-truncated columellas that can have a slightly pink tint. Another snail found in a similar locality with a pink columella is Burtoa nilotica which has a non-truncated columella. As yet I don't know of any other Lissachatina with a pink columella except possibly for Achatina albopicta (E. A. Smith, 1878) but information is scarce on most species and albopicta in particular has a larger, more reticulated shell not unlike Achatina reticulata (Pfeiffer, 1845).

The height of the spire and the relative width of the shell are very variable. The sculpture is more coarse than that of Achatina fulica and consists of dense axial threads interrupted by slight spiral grooves. The resulting appearance is not granulated as in a lot of Achatinids, instead the surface has what look like axially-aligned, short, slash-like grooves.2 The texture is certainly coarser than Achatina fulica, particularly near the sutures which are irregular and slightly crenulate. In most cases, even slender specimens are generally shorter and more ventricose than typical fulica.

What is typical in most forms is a thick shell and a weak periostracum that is easily worn off, giving the shells a white/grey or scuffed appearance.

Adult shell length averages up to 15 cm. long. Striped variations are common, the stripes generally but not exclusively straight instead of wavy. In most adult specimens the inner and outer border of the lip is pink, the border being thin on the outside but it can extend much deeper on the inside.

There are also uniformly brown ones, as in the case of mature specimens of the Limpopo valley. The flames they have as juveniles quickly become so closely spaced that the shell seems uniformly brown.1  It is also possible there are specimens with the blue-ish colour that was noticed for the panthera varieties. As the profile of this variant can be from slender to ventricose it should perhaps include the variant I have listed as panthera. I've included it separately to indicate the relationship with the now obsolete panthera species.

This variant is little more than a plainer-shelled variety of the nominate race and perhaps should be included in the nominate description. It is also known to occur in the same localities. It has been highlighted here because it is a fairly distinct snail and seems to have been confused with the South African Archachatina dimidiata (E. A. Smith, 1878) due to the divided colour of the shell. I have studied the nepionic whorls of juveniles and they are smooth, proving them to be sub-genus Lissachatina as expected.

The old references to Achatina dimidiata relate to what was proven by J. C. Bequaert to be Achatina (Achatina) balteata var. infrafusca (von. Martens, 1889).

Generally defined by the slender profile, striped, brown and slightly blue-ish forms are known for this variant.

The fact that panthera is now effectively a synonym of immaculata, has meant that in the past this type has no doubt been confused a little by the hobbyist community because in some cases, more ventricose specimens that would have been called immaculata, have been determined as panthera. As a result, you may well see pictures of non-slender specimens listed as panthera. In any case, it is largely academic now anyway.

In most adult specimens the inner and outer border of the lip is pink, the border being thin on the outside but it can extend much deeper on the inside.

If the small variety (90 mm. shell) seen in captivity, mistaken as stuhlmanni prove not to be the dwarf form lamarckiana listed below then they are almost certainly belong in this type. Either they are a dwarf variant or stunted through some environmental factor as experienced by Nisbet.3

Effectively just a dwarf variety, small and slender predominantly from Nyasaland (now Malawi), Mauritius and Madagascar, it has the same markings and features as a typical panthera variety from above.

The type that a few people in the hobbyist community understood to be Achatina stuhlmanni (von Martens, 1892) have since been proven to be immaculata from study of their nepionic whorls, their small size and slender shape being responsible for the mistake. Real stuhlmanni should have granulated nepionic whorls as dictated by their subgenus Achatina. Ours were found to have smooth nepionic whorls which means they are Lissachatina. This is reinforced by the straight, pink columella and the fact that we have seen what were thought to be crossbreeds between panthera and this type. There is a small chance that they were originally derived from this variant although it is more likely that they are simply small or stunted specimens of the panthera variant.

"...appears to be a depauperate albino race of A. panthera, remarkable not only for the total lack of color in the material of the shell, the very pale dirty-yellowish periostracum, and the pure white columella, but also for the small size, slenderness and lightness. The outline (particularly the relative length of body-whorl and spire), the shape of the aperture, and the type of sculpture are those of panthera, not fulica." 4

Only one shell was actually measured by Bequaert:

Conditions in the general care guide are ample, but it does seem that above average heat and humidity seem to be preferred. Active snails when in good health, they also seem to be most interested in fresh fruit and vegetables as oppose to cereal mixes and decaying food. There have been a number of cases of bad shell growth and retraction problems, enough to mention it here. It is worth noting that other species have been affected but immaculata seem unusually prone, particularly when juvenile. Because retraction is usually the symptoms of lack of eating it is almost impossible to diagnose to the point of being able to say definite on a species level.

Breeding seems to be the same as most African snails, occurring at any time but more likely when conditions are warm and humid. Clutch sizes range from 20 to 150 white eggs, though other shades are not out of the question. My var. immaculata "two-tone" hatched in 9 days at 26°C but it is impossible to tell how long they retain the eggs.

Much of the information was sources from "Studies in the Achatininae, a group of African land snails - Joseph C. Bequaert, 1950".