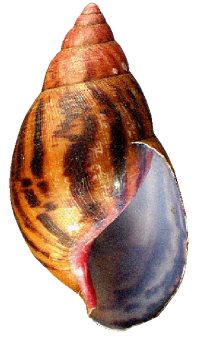 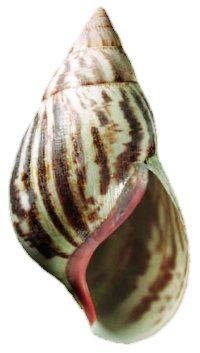 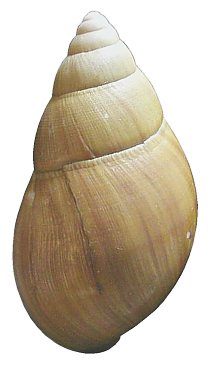 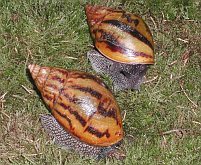 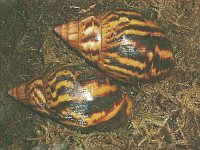 For an identification decision
chart click the picture below. 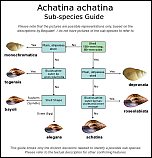 Achatina achatina are the largest land snails in the world and are a widely sought after species, due to their size, distinct markings and lack of availability. They are more difficult to breed than other African snails.

Tigers are found within the dense forest floors in the forest zone of Ghana and also in the humid riparian forest floors. They are believed to have a 3 year breeding cycle which is longer than other snails. This, coupled with deforestation and snail-picking for consumption has caused the numbers to dramatically fall over the last 10-15 years. Unfortunately, they are considered by many people from Ghana and other places in West Africa to be the most prized snail for eating, followed by Archachatina marginata and then Achatina fulica.

Reports by local people suggest that at one time, they were in abundance and could be picked from anywhere, including people's gardens. The people were indiscriminate and ate snails of any size. Nowadays they are becoming a much rarer sight however and Tigers caught in recent times are, on average, much larger than in the past, suggesting that they are breeding less, the babies are not surviving and/or the breeding population is vastly reduced.

Efforts are underway to encourage the locals villagers to eat Achatina fulica as there is a growing abundance of these versatile snails, spread accidently from East Africa. Achatina fulica are nutritionally the same as Achatina achatina.

Ghana has the BIA Bio-Sphere Reserve to study their local flora and fauna in a protected area. Achatina achatina are one of the species found within it. It has been noted however that for reasons unknown, snails found within the area are smaller than their slightly wilder counterparts.

Unfortunately the BIA Bio-Sphere Reserve don't seem to have a website although you can search google for information regarding this by clicking here.

Average adult shell length is 18cm, with an average diameter of 9cm. In exceptional cases the shell can grow to be 30cm long but this is very unlikely, especially in captivity. Large ones may achieve a shell length of 22cm.

In the wild, although many do attain longer life-spans than in captivity it must be noted that a large percentage of Tiger snails die after laying eggs through exhaustion due to malnutrition. This is rarely seen in captivity where a plentiful supply of food is readily available and conditions allow the snail to eat all year round.

It must also be noted that, in the wild, snails go into periods of dormancy regularly and are likely to attain a longer lifespan a result. In terms of active hours, a captive snail living for 3 years may perhaps be the equivalent of a 5 year old wild specimen.

The shell is conical in shape and fairly pointed.

"The shell of Achatina achatina differs from that of Achatina fulica in that it possesses some spiral sculpture, particularly close to the suture, crossing the axial growth lines, resulting in a somewhat reticulated surface. The columella and parietal wall is always a vinaceous red color [editor's note: not strictly true] though the columella is still truncated like A. fulica. A full grown A. achatina usually has no more than seven to eight whorls." (Taken from: http://www.ceris.purdue.edu/napis/pests/gas/manual/ident.pdf )

Other types of snails are often mistaken for Tiger snails. Perhaps the most distinctive feature is the dark rough flesh with a raised V shape on the tail. Archachatina marginata also have a V shape but they are easy to distinguish from Tigers by their much blunter shell. The newborn babies are easy to mistake for Achatina fulica but begin to become more distinctive after they are a few weeks old. It is worth mentioning that by this time juvenile Tiger snails also have the V shape.

Shell large and bulky when full-grown, 150-200 mm. long and up to 100 mm. wide. Columella and parietal wall vinaceous red.

Tiger snails prefer warm conditions of 25-30°C with a rH of 80-95%. More information to follow. Tigers are not the easiest species to keep and this may be due to the very steady conditions they are used to in the wild. Ghana/Cameroon have a practically constant 12/12 photoperiod that only extends to 13/11 for about three months. The temperature difference between night and day is only 2-4°C.

If you are having problems with inactivity it may be wise to mimic wild conditions as close as possible.

For more information regarding environmental conditions from their native country click here.

Achatina achatina attain sexual maturity within 21 to 24 months (Hodasi 1979, Ghose 1959, Lange 1950) and sometimes as long as 3 years. This period is halved if snails are raised under intensive feeding control in a captive environment.

According to Hodasi (1979), studies of A. achatina under laboratory conditions indicate that the species breeds from April to July, which coincides with the major rainy season and the longest days of the year. They are reportedly less abundant during this season than in the minor rainy season which occurs from September to November. This phenomenon could be a function of the complexity of the snails' reproductive ecology, growth characteristics and annual physiological rhythms.

It would seem then, that although the small rise in temperature and the minimal increase in day length no doubt play a part in determining seasonal changes, the biggest factor in triggering breeding is an increase in humidity. Eggs laid at the optimum time will hatch just in time for the major rainy season, giving the baby snails the best conditions for fast growth. It must be noted that the snails have less than 4 months to develop before the next dry season.

Reproduction is sometimes by self-fertilization and oviposition occurs in the second and third years and sometimes up to five years after the first oviposition year.

Dependent on temperature they take 10 to 31 days to develop and hatch. In normal, stable conditions the hatching viability appears to be 90+%.

Even in the rain forest of Liberia, which is one of the most humid areas of West Africa, the snail buries for aestivation during the drier months.

It is exclusively vegetarian, showing a predilection for decaying vegetable matter and is often even coprophagus (feeds on excrement).