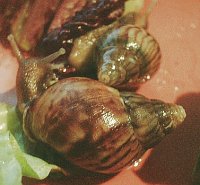 This page is intended to familiarise you with the parts of a snail that will help determine the species. When people ask for help identifying what snails they have, they get clear pictures of the snails but unfortunately, more often than not, they are pictures similar to Fig. 1. Pictures like this are fine for identifying some species but unfortunately they don't highlight the parts needed for identification of less clear-cut determinations.

We are working on a key that should allow you to determine things for yourself although this is not an easy task and may not prove to be a particularly reliable method. We're doing our best to make sense of such a confusing subject.

So for now, the trick is to save yourselves a lot of time and effort and get the pics needed for a clear identification. 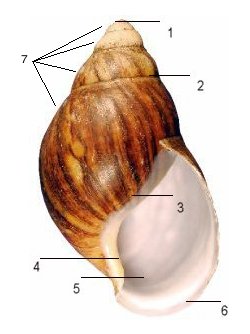 Fig. 2 is a great example of what kind of picture to take because it illustrates so many of the most important points for identification. It happens to be an Archachatina marginata shell but it is as good as any to demonstrate them. Obviously for a live snail it may be difficult to obtain such a perfect shot, you'd have to wait until they were fully retracted and keep them still.

The spire is the last few whorls of the shell, the apex being the very tip. The apex is the simplest and easiest way to tell the difference between an Achatina species (pointed) and an Archachatina one (blunt). For more details on how to determine between Archachatina and Achatina click here.

The sutures are the ridges or depressions along the spiral groove giving the impression that they somehow seal two parts of the shell together. The sutures of an Archachatina are generally deeper than those of an Achatina shell and quite often they seem to be strengthened. 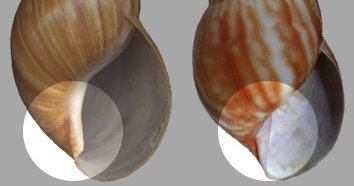 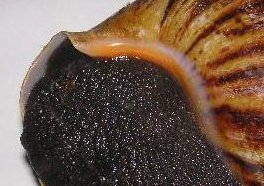 The typically apricot-yellow columella of an Archachatina marginata var. ovum clearly showing. Notice the thin white border to the columella, leading onto the parietal wall.

The amount the columella is twisted is also useful to an extent. Species such as Achatina fulica have a particularly twisted columella.

The colour of the parietal wall is another very useful way to ID a snail. This colour is often an extension of the columella colour as in the case of Achatina achatina (Fig. 6).

A reasonably useful feature is the aperture. The shape can help determine the group a snail belongs to but the individual and esoteric differences are more for the domain of expert malacologists. Having said that, some obvious determinations are still possible.

What is more useful to us is the colour of the aperture or shell-mouth although it is sometimes difficult to see.

Both the structure and colour of the lip or edge of the shell on both sides can help with identification so it is worth getting clear pictures of these. However with Achatinidae this is not a big help in identifying the species. Some species, like Archachatina marginata develop quite a flared-lip yet other species don't, so this is also of use. 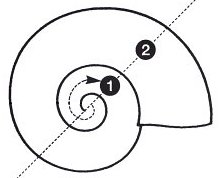 The whorls can tell us a lot about a snail for a few reasons. Firstly the number of whorls can help to determine between species.

The profile of the whorls and their comparative size can often help, some snails are very ventricose, others very slender, some have a huge body whorl, others have more evenly increasing whorls. So a flat overhead picture of the shell will help us to assess this. 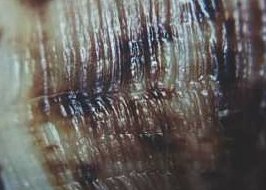 Lastly, the texture of the shell itself can be very informative. Some snails have a very smooth shell, other have a very rough texture.

The shell pictured in Fig. 9. clearly shows the rough, reticulated texture that is the namesake of its owner, Achatina reticulata.

It it worth wetting the shell before taking a picture as this helps to bring out the colour and texture much better. Carefully cleaning the shell as detailed in the care guide before photographing will aid this also.

Measuring the longest length of the shell and the widest width can be of use but for this we need to establish if it is an adult specimen so any age details would be a great help. 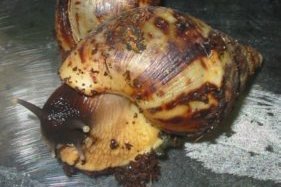 The body is one the least useful features when differentiating between species although it can help us when figuring out which group it belongs to. There are some cases when particular features can help us positively ID a species. For example: 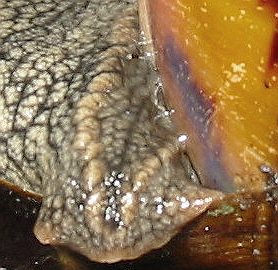 Another example is the tail of the snail. Some African species have a V shape on their tail. In Achatina we know of only one species with this so this combined with a pointed spire would determine it to be Achatina achatina (Fig. 11).

Without the pointed spire, the snail would be a species of Archachatina, because as far as we know they all have this trait, although in Achatina achatina the V is much more sharply raised.

The texture of the skin can help us determine a species, though more commonly the group (genus) it belong to. Achatina achatina also has a very rough skin texture, quite unlike other similar snails so this is a particularly useful example. Achatina tend to have a larger texture than Archachatina.

It is very important to remember that body-colour and the colour, texture and shape of the shell can be very variable within a single species so it is rare that one trait could positively identify a particular species but a combination of certain marks of identification help to narrow the possibilities down.

If you are going to take photos of a snail you need identifying remember to take the following:

When you have all this information you can post it at the forum with a much better chance of getting a satisfactory answer.