Often and easily confused with Archachatina puylaepti. According to A. Mead it is indistinguishable externally and requires analysis of the sexual organs to make the distinction. 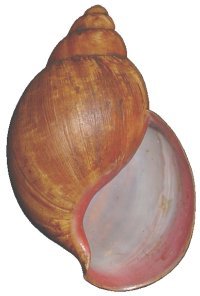 Originally described as follows from one specimen (not Bequaert):

"Shell solid, subovate, imperforate and somewhat shiny. Color: first three and a half whorls uniformly light brownish-yellow; following two whorls barred with irregular reddish-brown axial streaks which overlie the light brownish-yellow ground color; the reddish-brown color bars continue to the aperture, but the ground color changes from brownish-yellow to a decided light greenish-brown. On the last two whorls there appear to be upon close inspection a series of faint grayish, very fine zigzag lines, arranged more or less axially. Entire interior area of aperture, columella and parietal callus a deep vinaceous-red (Ridgway's pomegranate purple); extreme inner edge of outerlip and outer margin of parietal greyish purple. Whorls 7, convex, the last two impressed somewhat below the suture. Spire somewhat extended, produced at an angle of 60ï¿½. Body whorl about 77% of the total shell. Aperture rounded-ovate, about 65% of length of the shell, widest below the middle. Palatal lip flaring, bell-like, slightly thickened. Columella rather wide and twisted within, nearly straight and rather abruptly and broadly truncate. Sculpture: first one and a half whorls minutely rugose, gradually merging into the distinct, but very fine, decussate sculpture of the next three and a half whorls; on the remaining whorls the sculpture becomes irregular and the beading is only very faintly indicated; body-whorl roughened somewhat by coarse growth-lines."

More about the inside of the lip (Bequaert):

"In the holotype, the columella, parietal wall, inner margin of outer lip (except for the narrow edge) and the entire inside of the aperture to far back in the shell are a gorgeous deep vinaceous-red. This is true also for a few shells I have collected in the Gold Coast. More often, however, the inside is reddish, in varying shades from orange-red to violaceous only near the outer-lip over a width of an inch or less. All transitions may be observed between these two extremes."

The data is limited, but the difference between degneri and marginata is....

"...These shells could only have been degneri, even though the species is known to occur in Gaboon, so that the locality should be regarded as erroneous. A. marginata which exists in Gaboon, is ruled out, first because Shuttleworth uses it for comparison; secondly because he mentions no difference in color from his polyphyrostoma, so that his shells must have been extensively purplish inside the aperture, a character not found in any of the several forms of marginata with which I am acquainted..."