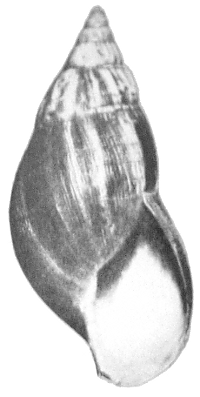 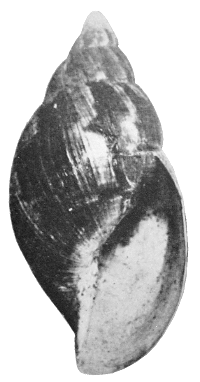 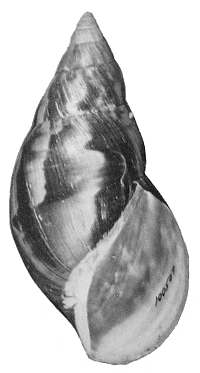 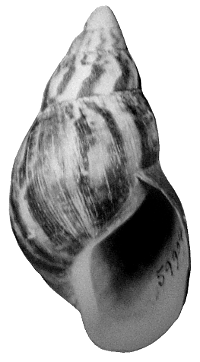 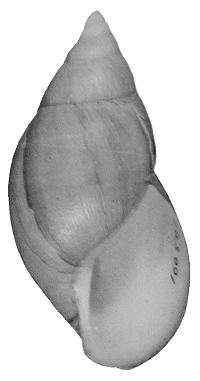 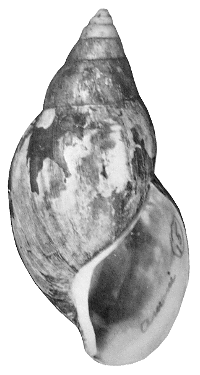 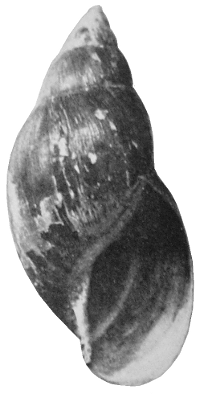 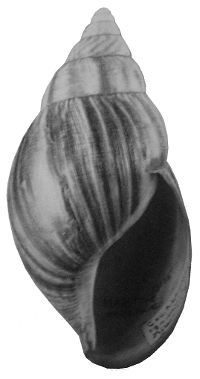 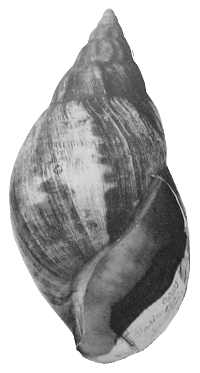 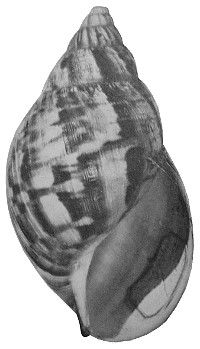 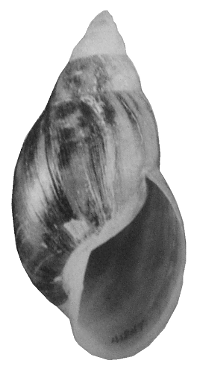 The following is taken from Studies in the Achatininae 1... 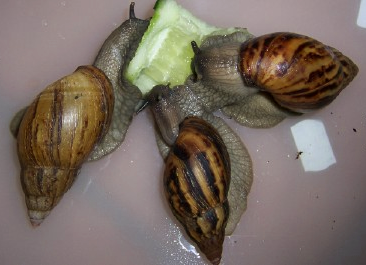 Achatina zanzibarica is a medium-sized, rather thin and light species, 80 to 135 mm. long when fully grown.

Adult shell usually elongate-ovate, widest at about the lower third, with a short, narrow, regularly conical spire, as a rule sharply set off from the inflated body whorl. Of the 6½ to 7½ whorls, those of the spire fairly closely coiled, very gradually increasing in width and length, moderately convex, separated by deeply impressed but narrow sutures. Apex obtusely pointed. Body-whorl over two-thirds, sometimes even up to three-fourths of the total length of the shell in front view, markedly more convex than the penultimate whorl.

Aperture long and comparatively narrow, half or more of the total length of the shell, semi-elliptical, with evenly curved outer margin. Inside bluish-white, showing the darker outside markings through the translucent shell. Outer lip thin, sharp, often with a dark border within. Parietal wall covered with a very thin, bluish-white glaze. Columella bluish-white, long and narrow, usually straight or nearly so, more rarely slightly concave, sometimes weakly twisted or folder in the upper portion, obliquely truncate some distance from the base of the aperture. 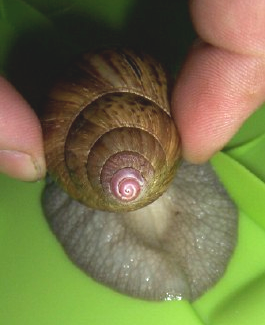 The sculpture of the very young shell is described in detail below. In the adult it is often nearly completely worn off on the early whorls, as far down as the fourth. The latter is finely dessucated by numerous transverse engraved lines crossing the fine closely-set vertical growth-striae at fairly even intervals. This sculpture is coarser and less regular in the fifth and sixth whorls, consisting of vertical series of elongate welts. It gradually becomes less pronounced on the body-whorl, being as a rule very superficial over the last half or third behind the outer-lip, and is even weaker at and below the periphery, although traces of the welts persist even near the columella. In addition to this coarser-sculpture, the periostracum of well preserved shells shows a microscopic "weave" pattern of criss-cross lines. The growth-striae are coarser, more fold-like in the upper part of the body-whorl, where they are set off, as a rule, by an irregular, deeply impressed line, producing a slightly crenulate or bead-like subsutural area.

Normally the ground color is straw-yellow or brownish-yellow, sometimes with whitish-yellow patches; the summit is either roseate or dirty-white, both conditions seemingly occurring in apparently fresh shells of the same colony. The fourth whorl shows the first traces of dark markings, as pale brown, straight, slightly bent or wavy vertical streaks. These on the succeeding whorls, from the latter half of the fifth on. On the penultimate and body-whorl the streaks are often very broad, but irregular, jagged at the edges, broken up into patches or confluent. Two shells in a lot of otherwise normal ones, from Magrotto (Pl. 41, fig. 2), are nearly unicolorous pale straw-yellow, with a few darker yellow vertical lines and a milky-white apex, and are evidently albinos. In the same lot transitional stages of partly marked shells connect them with normally marked individuals. The lot from Ilolo also contains a unicolorous straw-yellow example. 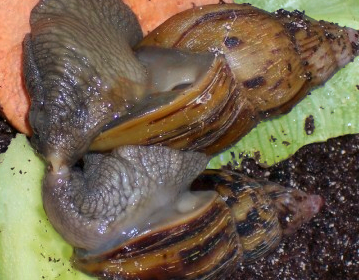 The species is variable in outline, even among adult shells, which accounts for the several named varieties. All of these are here regarded as individual variants since they are found in one locality if a sufficiently large series is available, and are also linked by transitions. An unusually slender and 2 more normally shaped shells, all from Magrotto, are shown in Pl. 4, fig. 2, Pl. 37, fig. 3, and Pl. 41, fig. 2.

Achatina zanzibarica is noteworthy for being one of the few Achatininae that are truly ovoviviparous.2  Mr. A. Loveridge found at Amani three adults, one dead, the other two alive, containing respectively 55, 72, and 26 young snails considerably beyond the nepionic stage. These are brownish-ivory (without the roseate hue of the apex of their mothers), at first unicolorous, but marked beyond the third whorl, above the periphery with vertical, slightly bent, light chestnut-brown streaks, They consist of 3¼ to 3½ whorls and are 8.5 to 11.2 mm. long, 6.5 to 8.55 mm. wide, with the aperture 5.7 to 7.5 by 3.6 to 5 mm. The first 1½ to 2 whorls apparently formed in the egg, are smooth or with extremely find vertical wrinkles. Spiral engraved lines, placed at irregular intervals, appear on the latter part of the second whorl, cutting across the growth-wrinkles. The dessucation gradually grows stronger, being more distinct beyond the third whorl than on the corresponding area of full-grown snails.

Another shell from Magrotto, 89 mm. long was found estivating, the aperture closed with the customary brittle, calcareous, white epiphragm. It contained 9 young shells of the size and width sculpture described above. Unhatched eggs, taken from some live snails at Amani, are pale yellowish, ellipsoidal, 9.1 mm. long and 6.5 mm. wide. 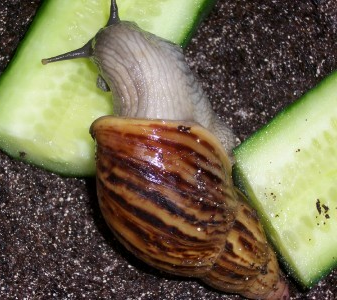 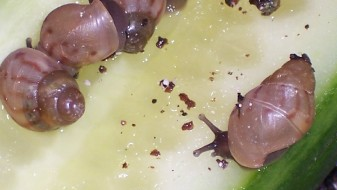 Both Achatina zanzibarica and Achatina lhotellerii were described from Nasimoya (or Mnazi Mmoja), a suburban section of the City of Zanzibar. This original habitat needs to be confirmed. All recent records are from the opposite mainland in Kenya Colony and Tanganyika Territory, where the species appears to be widely distributed.

An abnormal shell, apparently adult and shown in my Pl. 79, fig 4, found at Amani with normal examples, is remarkable for the nearly total lack of truncation at the base of the columella. It is 81.5 mm. long, 43 mm. wide, of 6¾ whorls, with the aperture 45.5 by 24 mm.