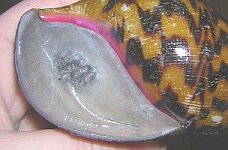 You can tell a snail is attempting to seal itself in by the formation of a papery film over the shell aperture. This film can be quite thick and is made of calcium.

Sealing themselves in because of dryness is called Aestivation.

If you suspect this is the case, simply bathe the snail in luke-warm water or mist heavily with a spray bottle. Put the snail back upright on a wet/damp surface such as a feeding dish and allow him to recover. It may take some time until the snail is satisfied that conditions are better and decides to come out. For this reason, it is perhaps best to sort the conditions out in the tank and return them. However, if your unsure this is the reason and you wish to test it, you can put them in a temporary container that is more humid.

Snails are cold-blooded and rely on the ambient temperature for heat. Once the temperature starts to drop, snails go through physiological changes to adapt to the cold. Sealing themselves in because of the cold is called hibernation.

Your snails generally will do well between 18°C and 30°C, with the usual average temperature being 20°C to 24°C. However, some species like it colder, some warmer so please check the individual species guides for notes contrary to the usual care advice.

When snails are suffering badly from pests such as mites, they often attempt to seal in for protection. This is often characterised by a failed attempt to build a calcified cover. If you know the environmental conditions are fine, then check out the following sections:

Some snails such as Achatina achatina are known to sometimes aestivate in captivity regardless of environmental conditions. This seem to be due to wild habits and natural bio-rhythms

In all of the above, if you are worried about this you can break the seal yourself to see if the snail is still alive inside.